Posted on 27 September, 2021
in: Categories: Emblem of the Month and Uncategorized.

Daniel Cramer’s Emblemata Sacra is the frequently most used emblem book in Protestant churches. His emblems are found in Brandenburg and North German churches. Emblemata Sacra was particularly extensively used in Denmark, as Carsten Bach Nielsen showed.[1] In the area around the town of Skive are, for example, 13 village churches with Daniel Cramer’s emblems on pews and pulpits.

In most cases, the pictura, the Latin motto or a part of the Bible verse, were taken from Cramer’s book. In some cases, however, there are changes that indicate that Cramer’s emblems were a part of a culture of communication.

This can be recognized by our emblem of the month. It is located in the village church at Ørum, situated near Viborg. The church was 1710 decorated with 38 emblems. The paintings are on the pews and on wall panels. Twenty-five emblems were taken from Emblemata Sacra. But on five panels with Cramer emblems, the motto was changed.

The image shows a cross with a written note pinned to it, which is cancelled with a red line by a heavenly hand. The pictura refers back to one of the biblical metaphors with which the New Testament authors attempt to interpret the death of Jesus. In the letter to the congregation in Colossae, the meaning of Jesus’ death is compared to the process of ancient debt repayment. Initially, when a debt was paid, the certificate of debt was cancelled out twice and publicly posted.[2] 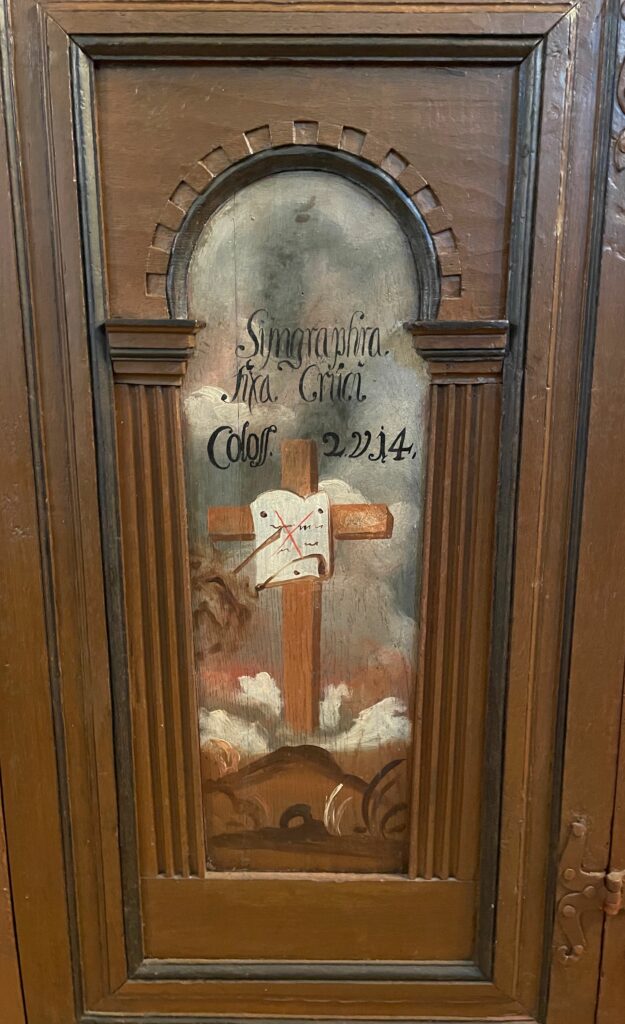 The author of the letter to Colossae applies this practice to interpret the death of Jesus. He explains that Christ cancelled the certificate of debt with his death. This certificate is also publicly displayed, namely on the cross. Thus, Col 2:14 states:

“God … having forgiven us all our trespasses, by cancelling the record of debt that stood against us with its legal demands. This he set aside, nailing it to the cross.” (ESV)

Both elements of the practice of debt repayment are related to the death of Jesus, the cancelling of the debt certificate and the public posting of it.

This biblical metaphor, based on an ancient practice, became the basis of the pictura of the emblem Cramer calls “Absolvor”. A certificate of debt is being cancelled and pinned to the cross. Both elements occur. The motto describes the result: “Absolvor – I am set free”.

It is surprising that in the rich texts that accompany Emblemata Sacra, however, one element is now missing. Cramer does not cite the biblical quotation from Col 2:14 in its entirety. He omits the decisive postscript that leads to the second aspect of the pictura – the public posting. He quotes the Bible verse Col 2:14:

“CHristus hat uns geschenckt alle Sünde/ und außgetilget die Handschrifft so wider uns war”. – Christ have forgiven us all trespasses and cancelled the hand written record, which was against us.

In the Latin alexandrine below the engraving, reference is made to the effect of this salvific interpretation of the death of Jesus Christ, namely justification in general. In the added verses by Conrad Brachmann on the left side of the emblem,[3] the second element essential for the pictura also does not occur, indeed that the cancelled death certificate is publicly posted on the cross.

At the reception in Ørum, the motto has been changed. Now, it says,

With the omission of the motto “Absolvor” in the original, this emblem is oriented neither to the dogmatic result of the interpretation of the death of Jesus on the cross nor to the single-word mottos, which were typical elements of the Emblemata Sacra.

By modifying the motto the emblem focuses now on the second aspect, which Cramer omitted in his biblical quotation in the Emblemata Sacra – the public posting.

The motto – Syngraphra fixa Cruci – Fixing the debt certificate on the Cross – hint at the whole Biblical quotation. With this change, the emblem is, on the one hand, reinterpreted and, on the other hand, supplemented by the aspect that was omitted by Cramer. At the same time, however, the emblem becomes easier to understand. For with the changed motto, the pictura now represents what the biblical metaphor of the complete biblical quotation expresses: A debt certificate fixed at the cross is cancelled out.

Such simplifications and clarifications can also be observed in Ørum in the five other modifications of the Cramer emblems. It seems that these changes are very well intentioned. Apparently, the addressee should be able to look at emblems and understand the emblems with a Bible in hand, looking up the biblical passages.

Have these simplifications reached the addressees? Were they able to connect the biblical quotations with the motto and pictura? And above all, did they understand the Latin with a not faultless orthography? The debt certificate is called syngrapha and not syngraphra.☺

We shall never know. But the effort to make an emblem comprehensible – we can really feel it, even today.