There are places on the map of Benedictine abbeys where, due to rich emblematic design, the choice of a single element of this design can cause a considerable headache to researchers and enthusiasts of the topic. The emblem I chose can be found on one of the stalls of the Abbey of Benedictine Nuns in Staniątki and refers to Chapter 2 of the Rule of Saint Benedict – “The Qualities of the Abbot”. The emblem shows a hill overgrown with grass and low shrubs, in the middle of which there is a tall tree attached to a stake.   The crown of the tree is covered with leaves, but we can see a withered branch growing out of the trunk. Somebody’s hands emerge from the clouds on the sides of the tree.  One holds a sickle with which it cuts off the withered branch, while the other roots out wild shoots growing from the tree’s roots. The whole composition is set against a background of blue sky, obscured by light clouds and illuminated by a bright aurora above the horizon. At the bottom of the painting, on a white background, there is an inscription from Chapter 2 of the Rule of Saint Benedict: “He should not gloss over the sins of those who err, but cut them out while he can, as soon as they begin to sprout.” In Regula Emblematica, this graphic pattern is accompanied by the following motto: Mox ut oriuntur (which can be translated as “may they quickly rise/grow”).

Fig. 1. Emblem on the choir stalls in the Benedictine Nunnery in Staniatki [photo by T. Śliwiński]

Looking at the emblem, the following interpretation may come to mind: the tree, that has established roots in the hill, symbolises the monk ‘rooted’ in the abbey, in accordance with his vow of constancy of the place (stabilitas loci). The vow taken may also be symbolised by the stake to which the tree is tied, as a symbol of the monk’s adherence/attachment to the abbey. At the same time, the stake can be a symbol of the Rule of Saint Benedict, which means that monks grow and develop by following its principles. We can also assume that the stake is a symbol of the abbot. Just as a tree is tied to a stake so that it will grow straight and not lean to either side, so the monks are to obey the Abbot and follow his decisions. As a result, the whole abbey will develop healthily. In his Rule, Saint Benedict attributes great authority to the abbot, seeing him as Christ’s deputy on earth. The hands on the drawing represent the abbot’s task of admonishing the brothers and ensuring that they do not succumb to temptation. Whenever there is a threat to the development of a monk, and, consequently, of the whole abbey, the abbot should, as far as possible, eliminate it – uproot. Hence, on the emblem, we can see hands uprooting shoots growing out of the tree and cutting off withered branches, which are the symbol of sins committed by monks.

Other emblems placed on the choir stalls of the Abbey of Benedictine Nuns in Staniątki seem to form a coherent emblematic programme referring to Benedictine spirituality and monks’ vows. Their roots can be found in the Rule of Saint Benedict, and their inspiration in Regula Emblematica by Bonifaz Gallner. 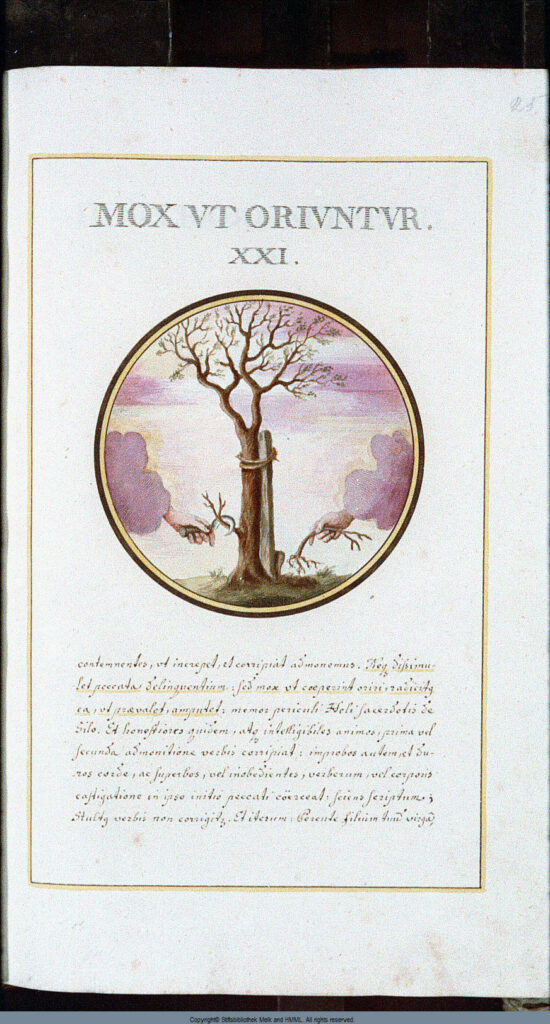 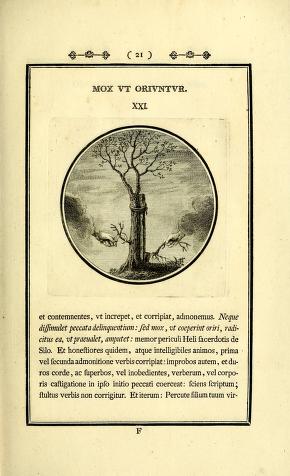 Bonifaz Gallner was born on 9 November 1678 in Ried im Innkreis and died on 8 April 1727 in Melk. On 5 October 1698, he made his profession at the Benedictine Abbey in Melk, and was ordained a priest on 9 April 1703. He studied painting and architecture in Vienna under the direction of the Italian architect and painter, Andrea Pozzo (1642-1709), which led to his work on the decoration of the church at the Melk Abbey. As well as painting, Bonifaz Gallner was also involved in architecture, writing and sketching [1].

In 1725, he completed his major work, Regula Emblematica Sancti Benedicti (the manuscript with the colourful emblems is held in the Melk Abbey Library, Cod. 510). This is the first work to present the full content of the Rule of Saint Benedict in an innovative way. The author made use of the preferred form of expression of the epoch and, by means of 187 emblematic engravings, illustrated the principles on the basis of which Benedictine monks would live. In 1780, after the author’s death, Regula Emblematica was published in Vienna. The engravings prepared by Gallner were faithfully reproduced in black and white by the engraver and painter Ferdinand Landerer (1730-1795), while the preface to the work was prepared by the Melk librarian Beda Schuster [2].

Gallner’s work, following the classical form of the emblem, consists of a motto that succinctly communicates what is to be discussed, an image, and a subscription that explains the representation on the icon. In creating Regula Emblematica, the author wanted the text of the Rule of Saint Benedict to begin to speak anew, highlighting certain contents and concepts in interaction with the pictorial elements and placing them in a new interpretative horizon.

The printing of Regula Emblematica was to make the work, being a valuable heritage of Baroque spirituality, so far known only to a narrow circle of recipients, see the light of day [3]. This was the case, as evidenced by the use of the so-called “Rule in Pictures” as a model during work on the interior design of monasteries or churches, especially those associated with Benedictine spirituality.

In Poland, Regula Emblematica enjoyed particular popularity, especially at the Abbey of Benedictine Nuns in Staniątki [4], from which the emblem described above originates. The abbey was probably founded in 1216 and is the oldest Benedictine female monastery in Poland that has been functioning continuously until today. For over eight hundred years, it has created its own history and tradition, which are an integral part of the history and culture of the Polish state, even though separated by enclosure [5].

Over the centuries, the church and monastery were rebuilt many times, their design and furnishings changed, so the abbey is full of treasures from past eras. Some of them are undoubtedly the numerous emblematic decorations throughout the abbey. They are located on the presbytery’s vault – their ideological programme corresponds to the content of the main altar, in which there is a painting of the Mother of God from the 16th century, depicting Marian themes. They can also be found on the vault in the eastern part of the body, where they are arranged around the crucifix on the rainbow arch and convey Passion content. Emblematic polychrome can also be found in the Chapel of Our Lady of Sorrows, its content referring to the Marian image venerated there. A whole set of emblems can also be found on the polychrome and on the stalls in the lower and upper monastery choir. The emblems placed there refer to Benedictine spirituality and their graphic patterns were taken from Regula Emblematica. It is interesting to note, however, that, compared to the original, the wording of the motto has been changed in almost all the back panels. The original Latin texts were replaced by mottoes in Polish. It is also worth mentioning that the Polish texts, in most cases, are not translations of the Latin texts, but new content additions to the painting compositions. These are usually quotations from the Rule of Saint Benedict, although not always from the chapter from which the drawing is taken, or quotations from Scripture [6].

Fig. 4. Stalls of the choir of the monastery in Staniątki [photo by T. Śliwiński]

Emblems are meant to be a union of word and image. Often, the attempt to interpret them poses considerable problems for the contemporary viewer as the 18th century symbolic world often remains a mystery to us. The very definition of an emblem shows that it does not make the viewer’s task of understanding it any easier. Its aim is to stimulate the viewer’s thinking and make his imagination work at top speed.